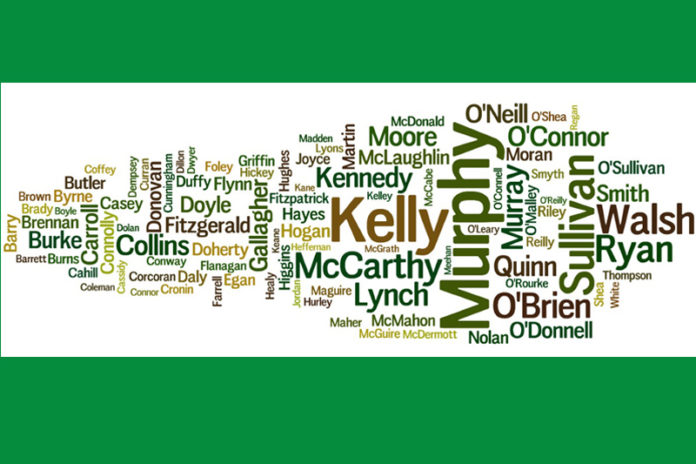 Whether you are Irish or Irish-American, you’re probably immensely proud of your surname. Many Irish families declare their roots by displaying the crest of their clan in their homes but which is the most common last name that wins in the battle of Irishness? IrishCentral took a look at the most common surnames in Ireland in order to come up with a top 10 list.

Smith and Murray are two of the most common surnames, but one is of British origins and the other’s Scottish, so they didn’t make the cut. Excluding these two surnames, we compiled the rest of the list, many of which were featured in our Irish Clans Month series – click through to learn more history and fun facts.

Take a look at the rundown in this video and you can find more info about the names themselves below.

Murphys – you win the prize for most common last name in Ireland, especially in County Cork.

This surname, which means “sea battler,” translates to Irish as MacMurchadh (son of Murchadh) and O’Murchadh (descendent of Murchadh), a derivation of the first name of Murchadh or Murragh.

O’Murchadh families lived in Wexford, Roscommon, and Cork, in which county it is now most common, with the MacMurchadhs of the Sligo and Tyrone area responsible for most of the Murphys in Ulster.

The name was first anglicized to MacMurphy and then to Murphy in the early 19th century.

Kelly comes second to Murphy as the most common last name in Ireland.

The Kellys are all over Ireland; the name originates from around 10 unrelated ancient clans or septs. These include O’Kelly septs from Meath, Derry, Antrim, Laois, Sligo, Wicklow, Kilkenny, Tipperary, Galway and Roscommon.

O’Kelly comes from the Irish O Ceallaigh, meaning “descended from Ceallach,” an Irish chieftain. “Ceallach” means war or contention. It is an ancient first name that is no longer used as a first name in Ireland. However, Kelly is a popular first name for women in the U.S.

3. O’Sullivan – The Hawkeyed Ones

Kellys may have bright heads, but O’Sullivans have hawk-like eyes.

The O’Sullivans or Sullivans are one of the most populous of the Munster families. In Irish, O’Sullivan is O’Suilleabhin, and there is no doubt that origin of the name comes from the word súl (eye), though whether it is to be taken as “one-eyed” or “hawkeyed” is in dispute among scholars.

Originally lords of the territory around Cahir, County Tipperary in the 12th century, they migrated to what is now west Cork and south Kerry, where the name is still very prominent.

Read more: What are the top 100 Irish last names?

The meaning of this “Welsh” name is pretty straightforward.

The name Walsh is one of the most common of the Norman associated names found in Ireland. It seems to have been the name used by the many different groups of Welsh people who arrived in Ireland with the Normans during the 12th century.

The name comes from Welsh, which simply means Welshman, and its early Norman form was “Le Waleys.” But this became gradually anglicized to Walsh.

O’Briens are pretty lucky – they are descended from one of the greatest and most famous Irish kings.

The name O’Brien, also spelled O’Bryan or O’Brian, translates to Ó Briain in Irish, which means “of Brian.”

The name indicates the family is descendants of Brian Boru, the celebrated High King of Ireland. This gives O’Briens leave to call themselves “high” and “noble.”

Most O’Briens can be found in counties Clare, Limerick, Tipperary and Waterford.

Byrnes can be found flying around all over counties Wicklow and Dublin, where it is one of the most common last names.

The O’Byrnes were chieftains of what is now County Kildare until the Norman invasion when they were driven from their lands and migrated (ha!) into the mountains of County Wicklow.

There, together with their allies the O’Tooles, they successfully resisted Norman and English domination for centuries.

The meaning of the Irish name Ryan comes from the old Gaelic word “righ” and the old Irish diminutive of “an,” which together form the meaning of “little king.”

The name Ryan comes from the Irish name O’ Riain – a contraction of the older Irish form O’Mulriain, which is now virtually extinct.

Ryan is also an extremely popular first name, especially in Britain and the U.S.

The Ryan family motto is ‘Malo More Quam Foedari,’ which, when translated, means ‘I would Rather Die than be Disgraced.’ And they call them “little” kings …

They might not be warriors themselves, but at least O’Connors descend from them!

The O’Connor name, with its varied spellings, doesn’t spring from a common source. The name arose in five areas of Ireland: Connacht, Kerry, Derry, Offaly, and Clare and split into six distinct septs.

The most prominent sept is that of the Connacht O’Connors who gave us the last two High-Kings of Ireland: Turlough O’Connor (1088-1156) and Roderick O’Connor (1116-1198). They trace their heritage and name from the Irish “Ua Conchobhair,” meaning from Conchobhar, a king of Connacht.

9. O’Neill – From Niall of the Nine Hostages

The O’Neill family traces its history back to 360 A.D. to the legendary warrior king of Ireland, Niall of the Nine Hostages, who is said to have been responsible for bringing St. Patrick to Ireland.

Niall is also said to have been incredibly fertile – he has 3 million descendants worldwide.

Ireland’s O’Neills were known by the nickname “Creagh,” which comes from the Gaelic word “craobh” meaning “branch” because they were known to camouflage themselves to resemble the forest when fighting the Norsemen. Crafty fellows, those O’Neills.

The O’Reillys round out the top 10 most common last names in Ireland.

Their family name is derived from the Irish “O’Raghailligh,” meaning descendants of Raghaillach.

The O’Reillys were the most powerful sept of the old Gaelic kingdom of Breffny (Cavan and the surrounding counties), and the family is still prominent in the area.

Reilly, often spelled Riley, has become a trendy given name in the U.S., for both baby boys and girls.